My Experience With OSCP Exam 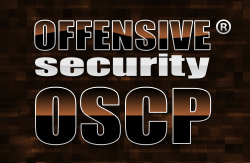 This year I decided to try OSCP certification. It took a lot of effort but I passed the exam successfully last month.

From what I have seen OSCP and other Offensive Security certifications are fairly unusual - most other popular certifications are really “book” exams, something you can read, memorize, and maybe even cram for. OSCP on the other hand is as hands-on as you can get, and that gives it unique value. When you see “OSCP” next to someone’s title you can tell that that person has real practical hacking skills, and haven’t just read a book on the subject. This is not to say other certs are not valuable, but OSCP in my mind is in a class of its own.

Lots of blog posts have been written on the subject, and a lot of them helped me prepare (thank you to those who wrote them!). Below I’ll share a few random thoughts on how I approached preparation for the exam and what advice I would have given my past self.

Preparing for OSCP starts with the course and continues in the practical lab. The amount of time you spend there depends heavily on your schedule and past experience. I have a fair bit of pentesting and software engineering experience, so I decided to go with 2 months of lab time. My family commitments, however, made it hard to find more than a few hours of lab time every day. In the end I spent about 3 weeks going through the course and completing exercises, and then a little over a month in the lab. It was grueling, and I think I would have benefitted from more time in the lab, so if you have time and finances to extend the lab - take advantage of that.

I feel that ability to work in the lab is the most important part of OSCP, this is where you get you money’s worth. It’s a little counter-intuitive to say that, but to me it’s more important than actually passing the exam - the skills you acquire and practice are what will matter in the long run. A person that learned a lot in the lab and maybe failed the first exam in the end will be better off than the one that didn’t work hard in the lab and passed the exam by some lucky circumstance.

There are 3 areas of preparation that I concentrated on - mental, physical and technical.

Mental prep for the exam is probably the most important one. When you feel calm and composed you can methodically grind all obstacles down. When you are frustrated and panicking your brain shuts down. Finding vulnerabilities requires patience, attention to detail, and creative thinking - and stress is a killer of these qualities.

Some people complain that the exam systems are harder to exploit than the ones in the lab - I didn’t find that to be the case. That’s not to say the exam was easy - I just found it as hard to do as exploiting machines in the lab. I think the reason why exam seems harder to some is that in the lab you are relaxed and can calmly explore your targets, while during the exam you are stressed and under the gun to meet the deadline, which makes everything more difficult. Practicing calming myself down, and pursuading myself that even failing the test is not a big deal but rather yet another step in my learning helped me stay more relaxed and think more clearly.

The brain gets tired after a while so it is important to remove as many steps requiring mental energy from the exam as possible. Any time you need to write a script, research a code snippet, or look up a piece of information it drains your brain power a little - so doing as many of these things in advance as possible helps free mental energy for actual looking for vulnerabilities. I prepared a lot of scripts for running scan tools, building reverse shells, compiling exploits, and others; put together lists of commonly used code snippets; precompiled some of the exploits; and so on - all of which helped me think less about the operational side of things, and more about my targets.

Another method that helped was switching context and taking mental breaks. It is often recommended that if you hit a wall with one system, or spend an inordinate amount of time on it without progress (e.g. 2+ hours) you should switch to another system. This was very true for me, switching between systems helped keep things fresh and allowed me to take advantage of “unconscious mind”. Some of the breakthroughs that I had occurred when I put the problem I was trying to solve out of my mind completely and concentrated on something else.

Much has been said about getting enough food, drink and rest during the exam - and it all makes sense. When your body is well nourished you can fire on all cylinders.

Frequent rest is important, so taking a quick break to walk outside, or to lay down to rest definitely helps one recharge. I’ve found that power naps do wonders for giving me an energy boost - as long as I do not sleep for too long and become groggy.

Here some of the things that I found on the technical side of the equation:

All in all it was a hard and stressful journey, but a very rewarding one. I’m already starting to miss the lab. :)