We hired somebody to gather intelligence on an enemy party. But apparently they managed to lose the secret document they extracted. They just sent us this and said we should be able to recover everything we need from it.

In this challenge we are given a PCAP file dump.pcap and a Python source code for the server - server.py.

PCAP file contains a recorded conversation between a DNS client and a server, where DNS queries and CNAME responses seem to contain encoded messages: 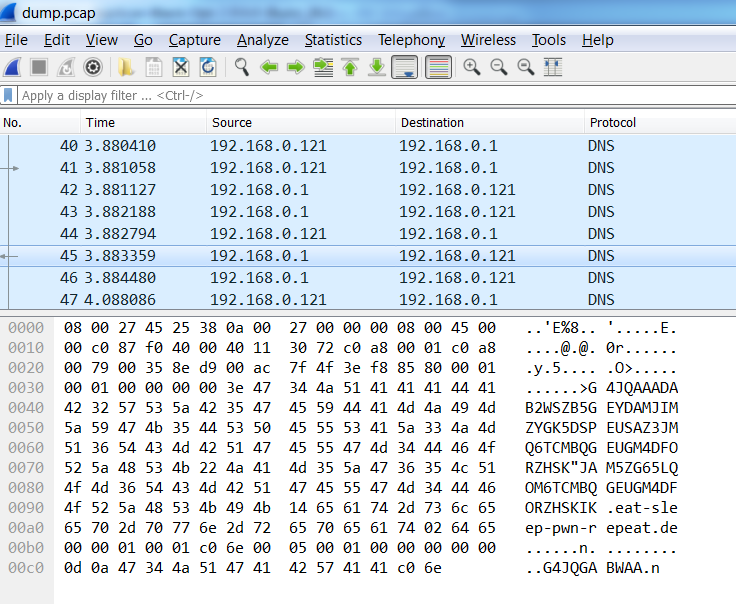 Close examination of the server code reveals that DNS queries and responses are used as transport for a remote shell session. DNS client initiates the conversation and the server responds by sending shell commands, for which the client then sends output. Commands are sent in CNAME responses to DNS queries, while the output is encoded in subdomain names in DNS queries. Pretty neat so far…

Each payload is encoded in Base32 and split into 62-character chunks to account for the maximum length of the domain name. The chunks are separated with periods and end in .eat-sleep-pwn-repeat.de. A typical payload would look like this:

Since DNS packets go over UDP, the protocol includes special handling for things like duplicate packets. To account for that the first 6 bytes in each payload contain the conversation ID, sequence number, and the acknowledgement. There is no time to develop a fully robust decoding solution, but at the very least it would be necessary to account for duplicate packets.

) I wrote the following script. It goes through all packets in PCAP file, extracts and decodes payloads, discards duplicate packets, and dumps the output to the screen:

Running it (python decode.py > output.bin) gives us the output file.

The output is a treasure trove of information:

Now all that is left is to backtrack the user’s steps from the output log and decrypt the document: